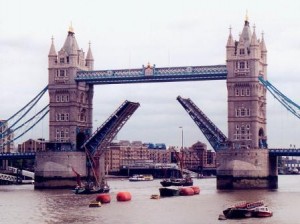 I’ve just returned from a combo business trip/vacation, including visits to Orlando, London, and Dublin. It was a great trip, and we had a fantastic time, although of course longing for my own bed and shower increased as our return date got closer…

One of the things I noticed in Europe was their efficiency in travel. We had a car for a few days in southwest England, as we wanted to pop around smaller towns and see Stonehenge; although driving on the left side, from a right-handed car, was a bit harrowing for the first bit, it was great fun.

The signage was always clearly posted, and we never got lost (although if I don’t see another roundabout again – an intersection where everybody drives in a circle to get where they’re going – it would be just fine with me…)

Driving in England was also a pleasure due to the courtesy of the drivers – no horns honking, no one cutting me off, graciously allowing me in when I realized that the next left at the roundabout was the one I needed… thank you, Brits, for allowing a Yank to drive with a minimum of anxiety.

In Dublin and London, we used public transport.

These larger cities can sustain a strong mass transit system, and at various times we took a train, the underground, a bus, and a taxi. Again, everything clearly marked and very easy to navigate. And, if you do happen to be standing on a curb, looking at a map, some kind-hearted soul will invariably stop and ask “Are you OK?”

The first time this happened, I answered “yes, thanks” a bit puzzled why they were asking that, as I didn’t have any bleeding knees or wasn’t limping; then I realized I was listening in “American” instead of “British” and that they were asking me if I needed help with directions… so the next time I replied, “Thanks, can you point me towards _______”, and they would.

Now, having traveled in similar fashion in San Francisco, New York, Washington DC, Hong Kong, Shanghai and Shenzhen, I know that this is not solely a European phenomenon; but during this trip I was perhaps more aware than usual since I had my teenaged children with me, and was showing them how to navigate the system in preparation for their inevitable travel without “Mummy” (it was Mothers Day in Britain when we were there – March 22nd – and the kids got great laughs out of all the “Mummy cards” they saw…)

What DID impress me was the parking in London for electric vehicles – complete with charging stations on the curb. I’d be interested in seeing something similar in other cities – do you know of other places that do this? If so, post it here!